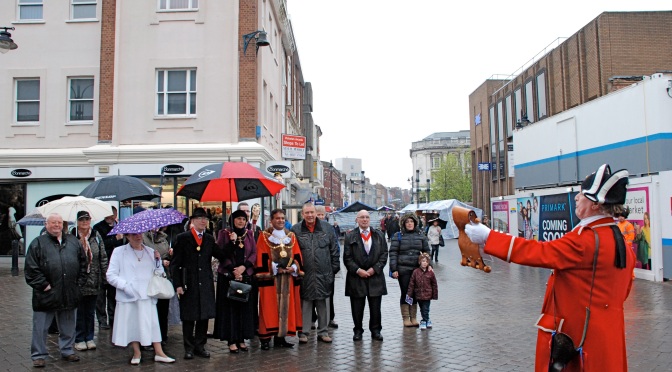 This Friday, 24 April sees the annual ‘Walking the Fair’ event in Walsall.

Each year the Mayor, guests and townsfolk walk the symbolic route through the town centre and Walsall Market in recognition of the vital role that markets play in establishing enterprise in the town.

According to its organisers Walsall Civic Society, the age-old walk is steeped in history and dates back as far as 1662. It heralds the opening of annual fairs, or markets and celebrates the town’s right to trade. This right was originally granted in Walsall’s charter by King Charles I.

The Mayor of Walsall, Peter Smith will lead this year’s celebration from the town centre.

He said, “This is a vibrant and colourful event and a highlight of my Mayoral Year. It is important to value heritage events like Walking the Fair as it not only keeps the tradition alive, but provides entertainment for local people.  I’m delighted to be taking part and look forward to chatting to our time honoured traders along the way.”

The opening to the walk starts at 10.30am in the square outside The Crossing at St Paul’s in Darwall Street, adjacent to the Bus Station.

Performance highlights from outside the church include a special ‘Sister Dora Dance’ from The Glorishears of Brummagem Morris dancers, and a special call to order from the Town Crier, Cyril Richardson,  who will then give readings from the Ruffus Charter of 1225, the town’s oldest document.

The procession, which is expected to last an hour, will then cross The Bridge and move up Bradford Street and  through the Market, where the Mayor will meet with traders who have collected gifts for his charity.

All are welcome to join in the walk. 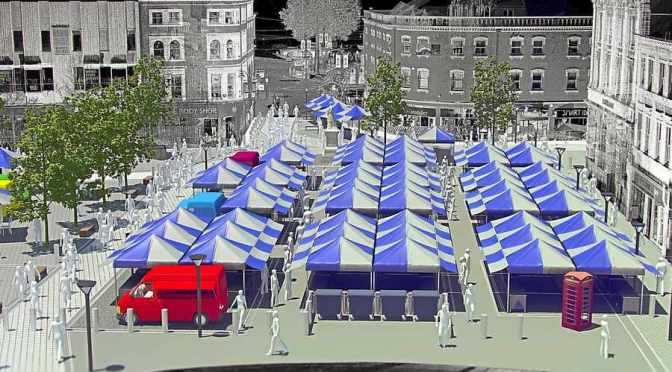 Planning chiefs have given the green light for a new, permanent location for Walsall’s historic market at The Bridge in the town centre.

The decision at last night’s planning committee cements the future of the 800-year old market, along with a number of public realm improvements in the town.

The Market will comprise of 70 pitches housed in a back-to-back layout so traders face pedestrian routes and two dedicated catering vehicle spaces focused around The Bridge.

Stalls can also be demountable, so when the market is not operating it can act as a public open space.

Changes to the market layout will be carried out in two main phases to minimise disruption to traders during the ongoing regeneration activity in the town centre.

Phase one, which gets underway in late March, will see the relocation of 11 stalls and a catering vehicle to The Bridge, two extra stalls on Bradford Street and up to 6 stalls in Market Square. Six trees will be removed from the north east side of The Bridge but these will be reinstated in phase two.

As part of the second phase, the fountain at The Bridge will be relocated within the Town Centre as a piece of public art, the podium on which it sits will be removed and Sister Dora statue repositioned into a more prominent location. The iconic Hippo sculpture has already been moved to a temporary location outside Walsall Central Library to allow work to progress and will return to The Bridge as part of the permanent market layout.

Walsall’s regeneration chief, Councillor Mohammad Nazir, said that the decision was a ‘benchmark for the town’ and was the culmination of extensive consultation:

“I am delighted to confirm that we now have planning permission for the Market’s permanent location,” he said.

“The new Market and public realm improvements will definitely enhance the town and compliments the ongoing regeneration projects in the town centre.

“We have had to stick to a specific timeline as there are a number of projects taking place in the town and we want to minimise disruption to traders and retailers alike. Within a few months, Primark and the Co-op food store will be trading and we’re looking forward to welcoming a new cinema in the town, so it’s a really exciting period for Walsall.”

Work will now commence on appointing contractors for the scheme. 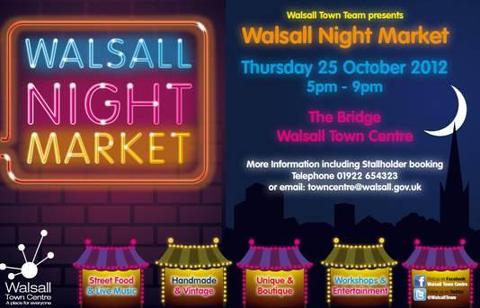 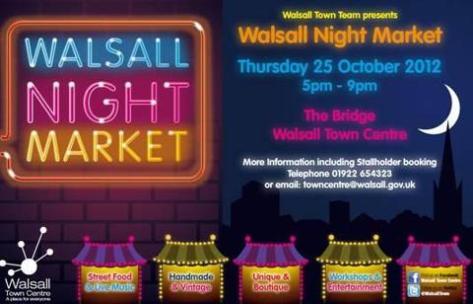 A free lantern making workshop is the latest attraction as part of a new event to bring a new shopping experience to Walsall.

A total of 55 stalls have now been booked for the event in and around The Bridge & Park Street in Walsall on Thursday October 25 starting at 5pm.

The event aims to bring together some of the best independent traders and street food caterers from across the region.

“Our aim is to create a real buzz and put on something very different and we’ve joined forces with Walsall Council over this project very well.

“So far, there’s been more than 55 traders who have been selected.

An appeal has been made for more walk about street entertainers and musicians to help provide the entertainment and showcase local talent.

Councillor Adrian Andrew, portfolio holder for Walsall Council said: “We’re looking to create a vibrant event that will really capture the imagination of shoppers including some who may not have been to Walsall for some time.

“It’s a chance to shop after work, bring the family in and enjoy some entertainment while doing it.

“So far, there’s a range of products usually unavailable on the traditional High Street for people to purchase from night market stalls range from things like a local artisan bakery, halloumi cheese wraps, handmade cup cakes and a stall dedicated to selling the Spanish delicacy of churros

“It is great to be working so constructively with businesses and supporting the ideas they are coming up with.”

From 5pm to 7pm children are invited to come and take part in a free lantern making workshop and then from 7:30pm a free cocktail master class will take place where you can try your hand at mixing various cocktails.