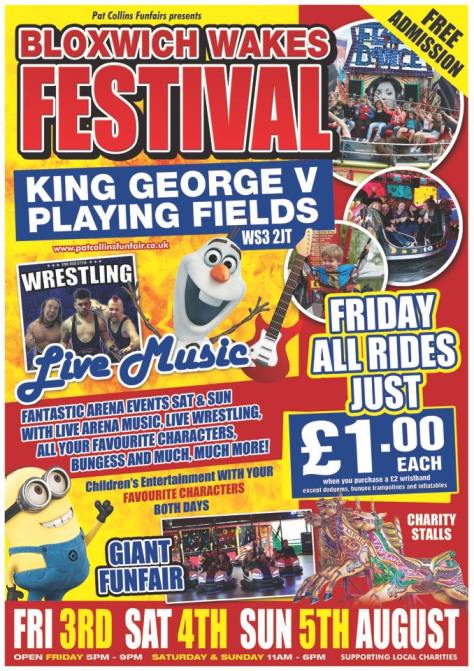 With the absence of Bloxwich Carnival this year, Pat Collins Funfair, long associated with both the carnival and Bloxwich itself, has stepped in to fill the gap with a new (but actually old) event, the Bloxwich Wakes Festival, on Friday – Sunday 3rd-5th August 2018.

The tradition of Bloxwich wakes goes back centuries, but from the late 1800s-early 1900s, Pat Collins, ‘King of Showmen’ and proprietor of the original Pat Collins Funfair, used to hold the Bloxwich Wakes, later officially known as Pat Collins Fete & Gala, here in the village every August, and it was a much-anticipated local tradition  until the Collins family left in the early 1970s.

The ‘wakes ground’ site is now the ASDA supermarket car park, but in modern times, Pat Collins Funfair has traditionally been held in the King George V Memorial Playing Fields, near to the entrance in Bealey’s Lane, Bloxwich.

The ‘new’ Bloxwich Wakes Festival has been organised by the modern proprietors of the current Pat Collins Funfair, Mr Anthony Harris and family, and in the spirit of the old Bloxwich Wakes will offer not only their traditional giant funfair, but also arena events on the Saturday and Sunday with live music, plus live wrestling, charity stalls and more.

For more information, be sure to check out the Pat Collins Funfair Facebook page and the company website.